Our Story
Her Story 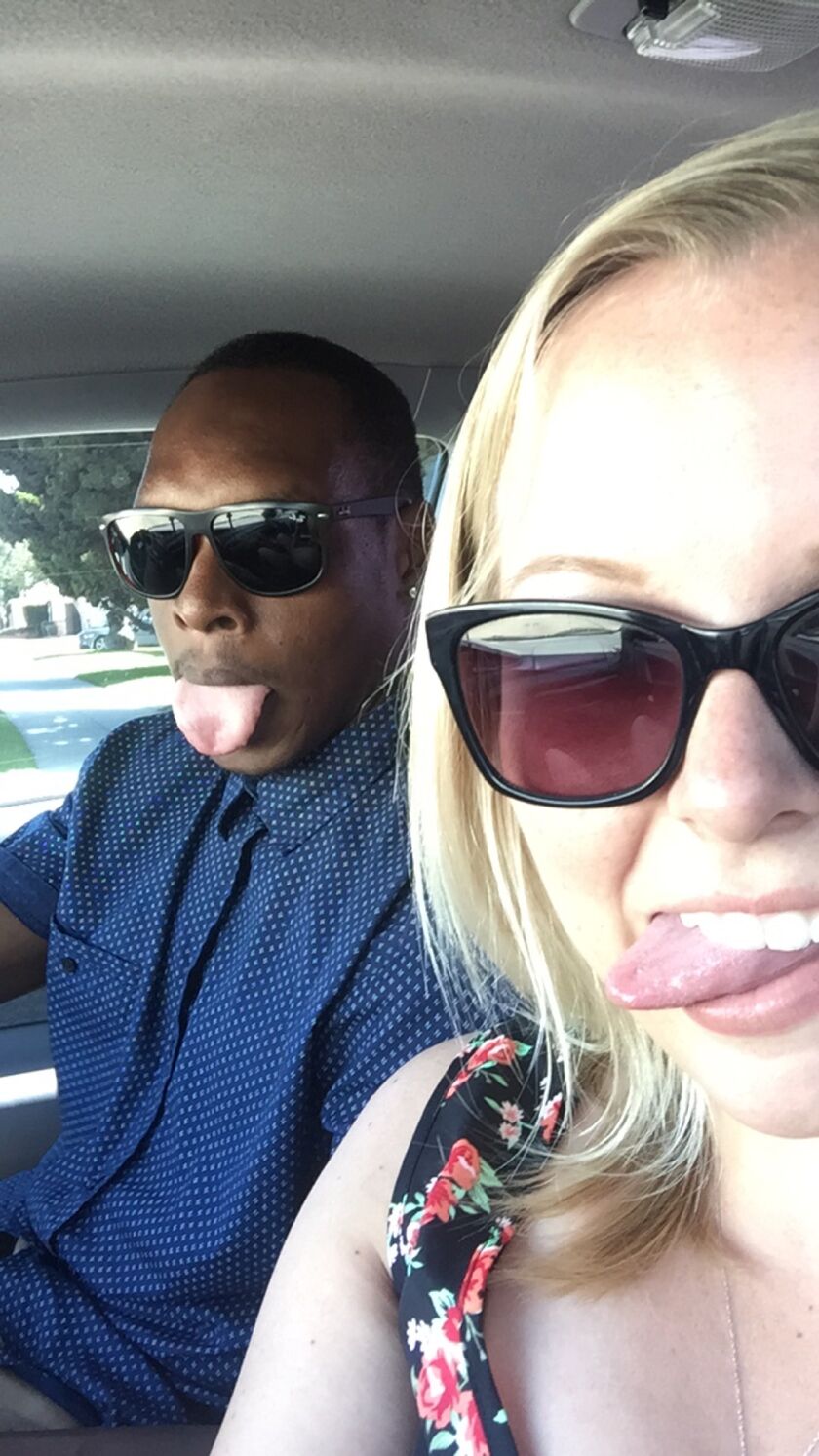 When I was 15 I was not like most girls... I wasn't really into boys, I didn't care what trends were in, or wear makeup and lip gloss - I just wanted to ride my bike. {Okay, mostly socialize with the friends I made while riding my bike} I was never a competitive racer, but in 2003 I traveled with my mom, dad and brother across the U.S. to compete at the biggest race of the year, the Grands. {Let's get real, my brother competed while I just rode my bike around the track a few times} While I was there I remember riding around with one of my friends and riding past this SUPER HOT boy - his name was Jeff Upshaw.

Fast forward 11 years to 2014. I was a flight attendant based in Seattle, bored so I downloaded Tinder. I was lying in my crash pad bunk bed - doing my thing, swiping along when NO WAY! I see the guy I had a mini crush on 11 years earlier. {I knew it was him because he was sporting his BMX jersey with his name on it in one of the photos} I couldn't pass up this opportunity. I had to swipe right for THE Jeff Upshaw andddd we matched. He "liked" me too!

We started messaging immediately and talked ALL the time on via the app. I was traveling often for my job and Jeff was jet setting for his racing career. When we were both in town he would ask me to meet up. "No thanks," I'd say. Or "Ah darn I'm busy today." I always had a reason that I wasn't going to meet up with him, no matter how many times he asked! {And trust me, it was a LOT!} I never would give in to his request to meet up, but we would text daily. Over time our communication faded a bit and I started seeing someone else. Once that relationship ended I swear that Jeff had it on his radar because he texted that very next day seeing how I was and what I was up to. He let me know that he had moved to San Diego and that he was doing well racing and loving life. I told him I was happy for him and that I was in a great place as well. Our communication became more and more frequent again. We talked about meeting up {keep in mind we had still never met in person}, we knew we had feelings for each other and that we needed to explore this more.

Fast forward through those loooong couple of weeks I had to wait to get on that plane. I was nauseous, terrified, excited, fearful, happy, - I felt it all {and almost puked a few times!} When the wheels touched down in San Diego I gathered my luggage and walked to the curb to find this sexy chocolate man standing by his green Ford Escort ready to swoop me off my feet. I was already in love.

I'm serious when I say I was already in love. I never believed in love at first sight until that moment. I texted my sister-in-law on the way to the Olympic Training Center from the airport and said, "I think I just met my future husband." And I did. I know get to marry that man that I had a crush on so many years ago from the BMX track in Tulsa, Oklahoma.

I will spare you the rest of the details, but our patience and tenacity paid off. We waited until the moment was just right to meet up because we {mostly me} knew that this was bigger than us, that there was more behind our relationship than just something regular. I am so blessed to be here, marrying my best friend. Here's to the best guy in the whole entire world, the one who makes me laugh, makes me roll my eyes, who gets me to sing and dance, and most importantly supports me and cheers me on through all of life's ups and downs.

Well well , where do I start?

I belief it was spring/summer of 2014. I had just moved from Dayton, Oh to Seattle ,WA. to further my career in BMX where I lived with friends who became Family and had a amazing experience to help me propel forward. mu focus in washington was to perfect my craft in hopes to be closer to getting myself on the Olympic stage. with that said, I had to make sacrifices to hold myself accountable to those actions.

With minimal time spent out and about I I found myself on a dating app where I ended up meeting (my future wife ) Holly Tillman, we went back and forth for 2 years on trying to get together. with her at the time flight attendant duties and my busy racing schedule we could Never line our schedules up but would check on one another periodically. fast forward the tapes to spring of 2016. I am checking in on Holly as I see that her mother got into a car accident. We chatted on and off for a few weeks and finally it became a bit more consistent. I was making another big move to further my bmx career once again. California was the destination, where I would be a step closer to making a dream come true. training and living in Ca was busy hard work as I had roughly 8 months to put myself in position to qualify for the 2016 Olympic Games.

Holly and I stayed in contact over the several months but again the distance was to far for us to act of in the moment emotions to see one another. as time went on we developed a friendship from a distance. which ignited a huge torch when we finally got to meet one another in person as long as we didn't make things awkward. lol I was a high due to the way my life and racing season was shaping up and I believe Holly was also after wrapping up Her Masters degree in communication in leadership around the same time. we talked everyday over the course of the next 2 months before she decided she was going to give me a shot. (consistency is key boys) I remember it like was yesterday, I was in Medelin Columbia racing the 2016 world champs me and holly had been talking as time persisted through out my trip.i kept telling her I wanted her to Come out to Cali we could hang out the beach, have sushi and have some fun. little did I know she was already thinking that lol before the weekend was over Holly had a plane ticket to Sandiego that Thursday mid day! she was just as beautiful as the pictures> beautiful blonde hair a great big smile that lit my world up even more. she was out in Sandiego to see me for a 3-4 day trip which turned into 11 days lol she couldnt resist the kind of love I was showeering her with. over that time I got a chance to feel the love for one another which I was ready to head into with out breaks. I prayed for a woman such as Holly and I prayed daily everyday that if it wasn't from GoD, keep it away from me. sure enough she was heaven sent! her support through one of my biggest moment sin my bmx career was at the end of her trip and I wouldn't have wanted it any other way! to have her there to share the experience with was when I knew I wanted holly to stand beside me and make her my mine.after making it to Rio me and Holly embarked on a the next chapter in our relation?life. We moved her from Boise to California to be beside me through the next phase in my racing career. we spent most of 2017 in California. shortly after we made a big decison to move back to Boise Id. and start our life together where we believed we could start the beginning of the rest of our lives. Here we are engaged and overally excited to get married September 29th 2018.

Ashley is my cousin and first best friend. We were inseparable from the time we were born and still enjoy every moment we get to spend together. You can usually find us talking about our inside jokes or laughing uncontrollably.

Alyson is the first girl that my brother dated that I actually liked. From the day she came into my life I knew we would be great friends (now sisters). We have had some great times together and I know there are so many more memories to come!

KC and I met several years ago at the University of Idaho (Go Vandals!). We connected over HIMYM and dinner parties with our friends. KC has been a great friend to me and a true inspiration in my daily walk with God.

Feather (yup, spelled that right!) and I met through our exes at the University of Idaho. She has always been my soul sister and someone that I can not talk to for 6 months but have so much fun when we reunite. In college we were the girls you'd find opting in to Netflix movies over going out almost every night.

I met Coach one day at Chula Vista BMX when she walked up to me and said, "So did you create that flyer yourself?" in a classic Terra-tone and then we became best friends. Terra is my literal soul sister, the evil twin and bad influence but we always have the BEST time together. I'm so happy to include her in our special day! And if you're on the hunt for Margs, she's got your back.