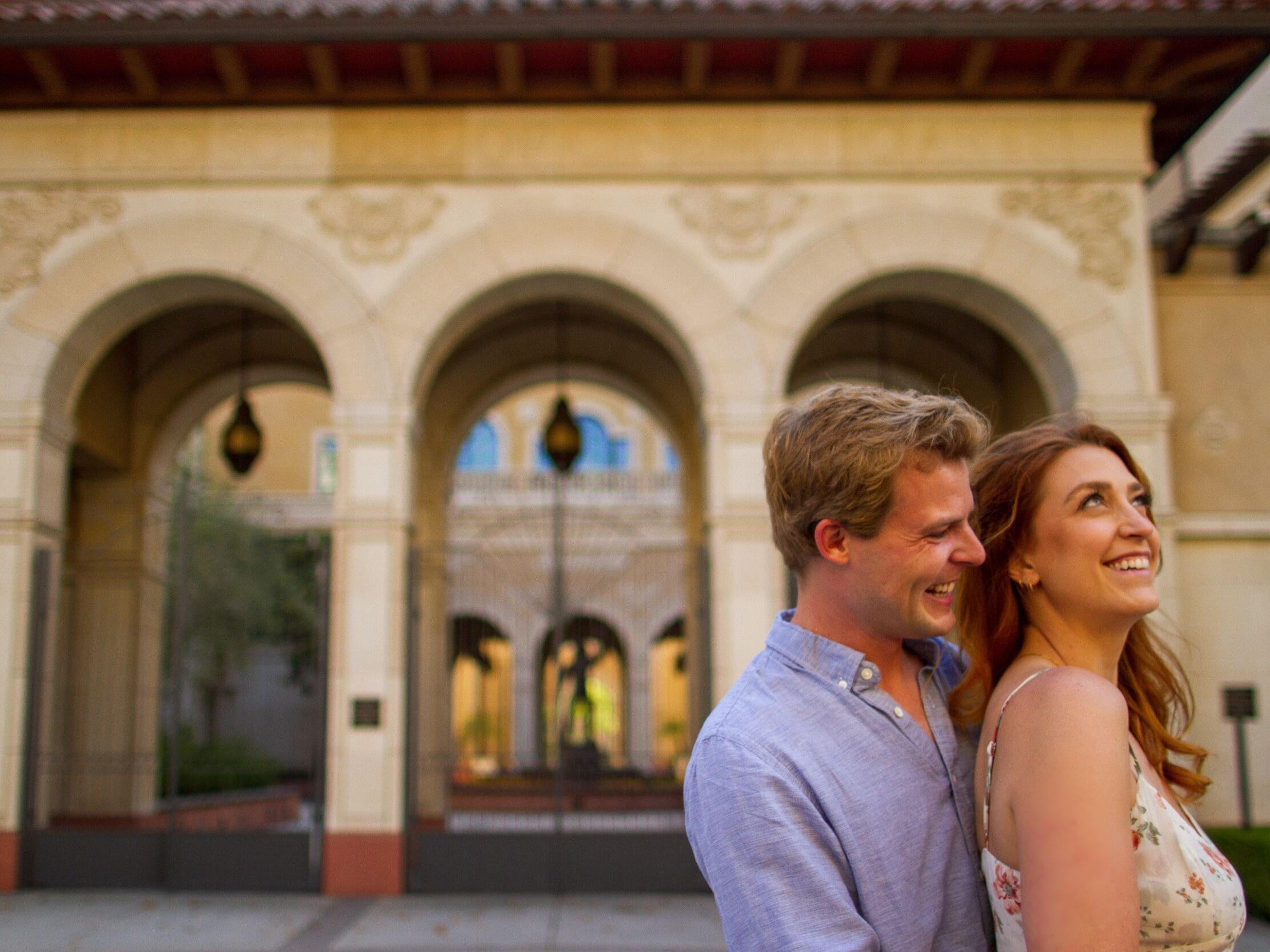 Molly and Edd often say they are, “never rushing, never waiting, and always right on time,” on their journey through life. A mantra they adopt in the small moments like when a pair of seats at a crowded restaurant become available just as they arrive, to the big moments like finding their first home while in the neighborhood viewing a totally different house. So it is in the spirit of serendipity that we best capture Molly & Edd’s Story.

Molly and Edd first met on August 19, 2009 on move-in day at the University of Southern California. Despite their respective dormitories being nowhere near each other, through a series of random events Edd found himself on the 11th floor of Fluor Tower meeting Molly where a spirited debate regarding their respective hometowns of New Orleans and Detroit proved to be both their introduction and first debate. Molly won.

It would make sense that after their chance first encounter Molly and Edd’s romance would flourish from there, but despite being peers in a small program at the USC School of Cinematic Arts, joining Greek chapters across the street from each other, and being literal next-door neighbors, Molly and Edd managed to wholly avoid ever really getting to know each other during their four years in undergrad. Upon reflection, they both agree this is for the best.

A little over a year after graduating from SC, Molly and Edd were early in their respective careers in the entertainment industry. At a time when they were both enjoying 80+ hour work weeks, comically low incomes, and the ennui of weighing if showbiz is really worth it, the two of them figured it was a great time to try dating each other. The dates were phenomenal, but the timing less so and they once again needed to spend a few more years finding themselves.

It was at the right time early in 2019 that serendipity brought Molly and Edd together for the last time. A chance New Orleans connection led to Molly and Edd having lunch, followed by Molly’s 8,000-mile solo road trip, and then their last first date on May 17 where they saw The Tedeschi Trucks Band at The Orpheum Theatre in downtown LA. The Perfect Date.

From that moment on, Molly and Edd’s love for each other blossomed and grew on shared road trips, culinary adventures, and all the many quiet moments in between. Edd had opportunities to introduce Molly to midwest culture - see: cold - and Molly had opportunities to introduce Edd to New Orleans culture - see: delicious - including their first Mardi Gras weekend together in 2020. Little did they know, just like the rest of the world, that this illustrious and magical experience would be one of their last times celebrating with friends in the streets for more than a year to come.

Molly and Edd spent the next six months living in quarantine together, where they thrived under the COVID pressure cooker, which only served to reenforce their vision of the future together. And so on October 3, 2020 under the guise of an otherwise ordinary road trip to Santa Barbara, Edd awkwardly pulled over on the side of the Pacific Coast Highway and asked Molly to marry him. She said, “Duh.” Soon thereafter, Molly and Edd bought their first home together in their newly beloved Eagle Rock neighborhood in Los Angeles, moving in together to start their next chapter in January, 2021.

Their wedding day on March 5, 2022 will mark over twelve years since their chance first meeting at USC, and while they may not have been together since that day they are forever grateful for the road that brought them back to New Orleans. A road where they were never rushing, never waiting, and always right on time.

Edd and Molly sit next to each other at USC Graduation with Guest Speaker Jimmy Iovine and Dr. Dre. (Also pictured Bridesmaid Emily and Groomsman Aaron!)

Edd and Molly's first road trip together to San Francisco!

Behind Home Plate at Dodger Stadium! Can't wait to go back to games!

Sound of Music at the Hollywood Bowl!

Road Trip across the Southwest!

So excited to celebrate with y'all!