NOTE: All attendees from the groom's side should be at the Baraat outside the hotel at 10am. Those from the bride's side who'd like to attend the Baraat can come to the Baraat too.

Led by the nationally recognized shastra Guru Dutt and celebrity Acharya Ramesh Mehta, in addition to world-famous nadaswaram, shehnai and tabla musician disciples of Ustad Fateh Ali Khan (Bismillah's grandson) and Zakir Hussain, the Gujarati-Telugu Hindu wedding ceremony will undertake the holiest of rituals during one of the most auspicious and deeply divine times of the year.

Come down to the hospitality room to mix and mingle with other hotel guests attending the wedding from both sides.

A great way to pregame before the Sangeet festivities begin... beverages provided 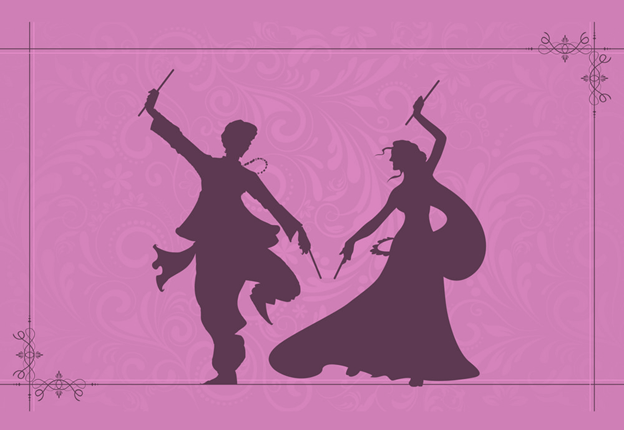 The equivalent to the "rehearsal dinner," the Sangeet is one of the most talked about pre-wedding events to celebrate the coming together of two families in the union of their children. The traditional Sangeet is a celebration of the arts with family and close friends and includes dance and singing performances, followed up by Dandiya Raas Garba - the traditional folk dance form of Gujarat.

Join us for an eventful evening filled with food, henna tattoos, and artistic performances. Those in attendance are in for a treat as memorable acts and numbers kick off this monumental wedding weekend!

ATTIRE: Indian or business casual that allows you to dance freely and actively - visit your local Indian clothing shop or search on Amazon if you are in need of proper clothing

The Baraat procession is a groom's travel and entry into the wedding venue. This will be a large traveling dance party with DJ's, live percussion drum (dhol) players, and a luxury car surrounded by the groom's entire side of family and friends.

The end of the baraat occurs when the elders of both families meet. The groom is then greeted with garlands to the sound of live shehnais and nadaswaram musicians, who are being flown in from New York and are the only professional disciples of legends Ustad Fateh Ali Khan (Bismillah's grandson) and Zakir Hussain in the country.

WHO ATTENDS: All invitees from the groom's side and those from the bride's side who'd like to partake

Wedding After-party
Cheap (that is the name of the place - it is actually the most expensive bar in the area)
309 S Howard Ave, Tampa, FL 33606, USA

Uber over to the SoHo district (2-3 miles and 6-7 minutes from the hotel), named one of the bro'est areas in the country. Home to tens of bars and clubs within a four block radius, SoHo is the ultimate destination for the tourist party animal and the young at heart.

Dress to impress, Florida style... we'll have bottles poppin', champagne flowing, and tables turning, but feel free to go out and about to explore on your own as the night goes on. There's place on this street for all personalities.

WHO ATTENDS: Only for the young at heart...

Enjoy the amazing Tampa December weather outside next to the hotel pool and gazebo.

Led by one of Houston's widely recognized private yoga instructors, with hundreds of students across the world, certified yoga therapy instructor Menaka Rammohan (Naresh's mother) will lead a detoxifying yoga session for all levels, experiences and backgrounds. The class will be delivered in English, Hindi, and Telugu.

WHAT TO BRING: Towel or mat 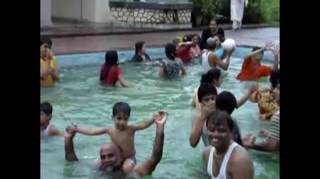 Where can you strap on a bathing suit and take in 70+ degree sunshine at the beginning of winter and in the middle of December?

Enjoy your destination wedding to get away from your cold abode and enjoy your last day in the Florida sunshine.

With music blasting and servers ready to take your drink and food orders, come out for the ultimate day party at the hotel pool.

All ages welcome and kid-friendly 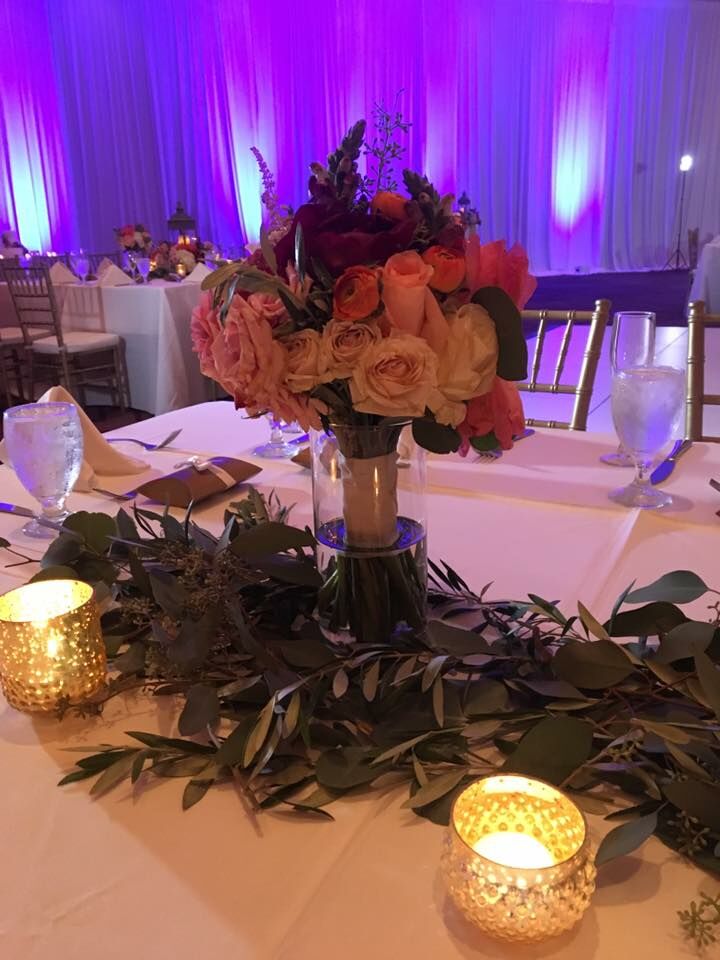 Cap your Tampa stay off with a beautiful night of incredible performances by professional and semi-professional artists and musicians, captivating speeches, never-ending dancing, scrumptious bites, and loads of fun.

Naresh and Avani met on the dating app Coffee Meets Bagel. Their first date consisted of a shared, vegetarian Thai dinner at Thai Prime next to the hotel where their wedding is taking place. They then enjoyed a really fun night out in Tampa Bay’s SoHo district (where the wedding after-party will be) that lasted into the wee hours of the morning. In total, they ended up visiting seven or eight different places on that first night.

Their second date was the very next day at the Laxmi Narayan Mandir, where Naresh has been visiting every Sunday for yoga, meditation, and prayers.

Their third date was the next day after that, at P.F. Chang's for dinner. 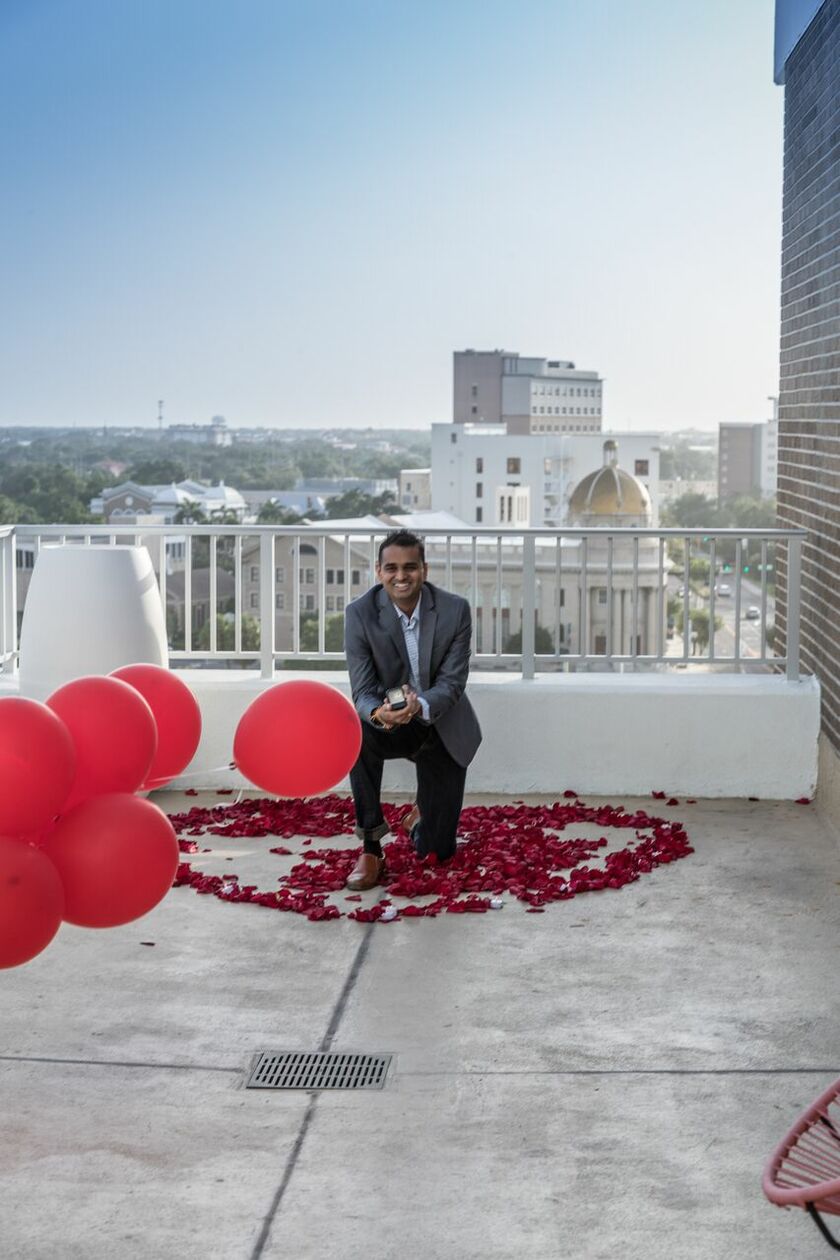 Weeks before the proposal day, Naresh’s friend Santosh Govindaraju sent an email invitation for his birthday party at the top of the Aloft hotel in downtown Tampa Bay. Coincidentally, on the same day as the party, a different friend of the couple, Michele Renee - who runs a hair and makeup studio - invited Avani to participate as an "Indian model" during training for her new artists. Naresh and Avani decided to meet at the Aloft hotel for the birthday after Avani's beauty session.

On her way to the hotel, Avani received a call from Naresh telling her he had just gotten to the birthday and that a guy at the entrance would lead her to a special location for the occasion. When she arrived at the front, she found it odd to be met by a photographer. She followed the photographer up to the top floor of the hotel.

As soon as Avani opened the door to the penthouse, she knew there was no birthday party. The room was filled with red balloons, hearts, roses, candles and her favorite Ferrero Rocher chocolates.

The photographer had Avani sit down to watch a video on the TV filled with sweet messages recorded by their families and photos of the couple together. Halfway through the video, she was confused why she was watching this alone while the photographer was snapping pictures of her reactions. She legitimately thought Naresh was late to his own proposal. She couldn't even concentrate on the video because she kept gazing around the penthouse for him... but at the end of the video, there was Naresh, telling Avani to come out to the balcony.

Avani followed a trail of roses from the TV couch to the balcony. Another pathway outside led her to Naresh, who was on one knee in a heart shaped bed of petals bordered by candles. He said a few words about how it had been exactly 364 days from the day they first met and how his life had completely changed for the better. It was such a sweet and thoughtful proposal, and of course Avani said YES!

After an immediate photo session with the photographer around Tampa's Riverwalk, the couple returned to the penthouse, where about 30 of their close family and friends secretly gathered for a surprise engagement celebration! This was actually more of a surprise than the proposal!!! Some of their family drove or flew in from out of town. Other friends FaceTimed into the event. It was an eventful night of dinner, drinks, dessert, and love.

Everyone celebrated the night and ended up at the hotel bar downstairs, which was blocked off for the group's party.

Naresh, his parents, and Avani then spent the rest of the weekend in Orlando at a resort near Disney to keep the festivities going.